The graph below shows the unemployment rates in the US and Japan between March 1993
and March 1999. Write a report for a university lecturer describing the information shown below. You should write at least 150 words. 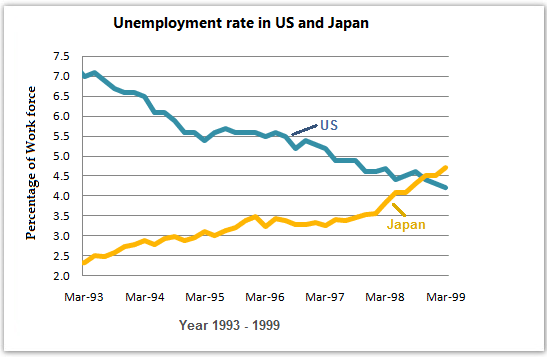 This is an answer written by a candidate who achieved a Band 7 score. Here is the examiner’s comment: This is a good account of the information presented in the graph, although occasionally the organisation of the data is slightly unusual. The writer grasps all the key points, however, and supports these with figures, before providing a summary of the main points. Sentence structures are more than adequate, although the writer has some problems with the use of tenses and prepositions. There are minor examples of unsuitable register (e.g. ‘turned out’, ‘disastrous’, and one contracted verb form), but as there are only a few instances of this, the candidate has not been penalised.

According to the results of the labour-force research published recently, the following conclusions can be drawn from it:

The major conclusion that I’ve drawn using the graph, is that number of unemployed in USA decreased by about 2.0% in the course of six years, while in Japan it actually increased by 2.5% percent. As a result, in March 99, both Japan and US had about 5% of their work force unemployed.

Did you find apk for android? You can find new Free Android Games and apps.
Post Views: 20